How Dangerous is Mold? Can Food Mold Cause House Mold?

How Dangerous is Mold?

According to the United States Department of Agriculture (USDA), molds that produce mycotoxins can cause illness. The USDA explains that "mycotoxins are poisonous substances produced by certain molds found primarily in grain and nut crops, but are also known to be on celery, grape juice, apples, and other produce. There are many of them and scientists are continually discovering new ones. The Food and Agriculture Organization (FAO) of the United Nations estimates that 25% of the world's food crops are affected by mycotoxins, of which the most notorious are aflatoxins."

How dangerous is mold depends on the amount of exposure and the respiratory system of the person being affected, as not all persons react in the same ways. Signs and symptoms can include headache; dizziness; nausea; eye, nose, or throat irritation; dry cough; dry or itching skin; difficulty in concentration; fatigue; and increased asthma attacks. The severity of these symptoms determine how dangerous is mold.

Food mold can be seen on the surfaces of foods, like white dust on cheddar cheese, fuzzy green dots on white bread, furry growth on jams and jellies, and a black velvety texture on fruits. The problem is, the mold isn't just on the surface. If you're seeing mold on the surface of foods, it's because root threads have invaded it deeply; and in some cases, toxins could have spread throughout the entire food. The types of mold most often found on meat and poultry (as well as many other foods) are Alternaria, Aspergillus, Botrytis, Cladosporium, Fusarium, Geotrichum, Monilia, Manoscus, Mortierella, Mucor, Neurospora, Oidium, Oosproa, Penicillium, Rhizopus and Thamnidium.

So how dangerous is mold? Is all mold dangerous? No, not all food molds are bad. For instance, some molds are used to make certain kinds of cheeses - like blue cheese and gorgonzola. The molds used to manufacture these cheeses are safe to eat.

Can Food Mold Cause House Mold?

In the right environments, yes. Mold spores travel through the air, so if there is affected food - say, a piece of moldy bread - left lying on the countertop, as it dries, it will release its spores into the air. Those spores can get sucked into your air conditioning or heating vents and circulate throughout your home. How dangerous is mold depends on the type of mold and how much of it there is.

Is Mold Affecting Your Health?

Don't wait till it is too late, AdvantaClean can help, request a service appointment today!

How to Minimalize Mold Growth

When it comes to controlling mold growth, cleanliness is key. Mold spores from affected foods can build up in your refrigerator, dish cloths, and other cleaning utensils.

A recent article published in Woman's Day recommends a few housekeeping tips for moms who want to fight off mold growth, including:

How to Protect Food from Mold

How to Handle Food with Mold 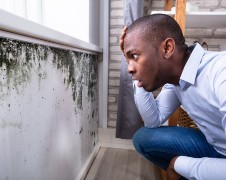 Why is mold worse in the Summer?

As the temperatures begin to warm up, you're happy to see the end of winter and the start of the summer months. One thing that you don't love about the summer months is the need to spend more time-fighting mold throughout your home.

Have you found mold in your home? Sometimes it's easy to see in moist places like the corners of a shower.